0
Votes
Undo
As it was the case in 2017, I'm sharing some league statistics after wrapping up our 4th season: 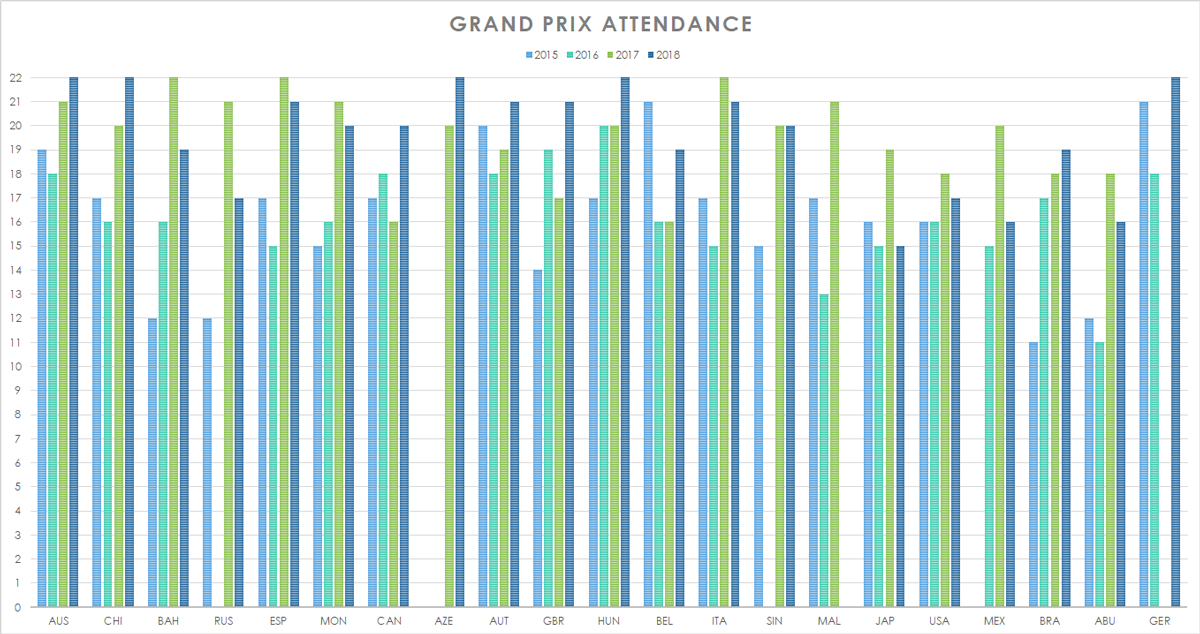 We had an average grid size of 19.7, that's up 0.1 from 2017, not the growth I wanted to see but it's still not bad at all. The first half of the year was pretty much neck-and-neck with 2017, with some noticeable improvements such as the Canadian GP, up from 16 to 20. What worries me is what happened after Singapore, we averaged 16.6 drivers per race compared to 18.6 from last year, that's two full cars that did not race the last 5 races of the season. What is it to attribute this drop? not sure, maybe too much coincidence with lots of drivers having personal things to do, I don't know...

Here's a new table I'm gonna try to publish every year, it basically shows who are our most reliable drivers in terms of attendance, and I have to say a big thank you to Ezequiel Montero for having a perfect attendance record never missing a single race in 3 years. You can tell there's a strong core with Richard Haynie, John Cook who every year seem to need to go through the Winter Series but makes it in

, Sean Higgins, Otto Acosta, and Leandro Carlos Schwaab who we hope to see back next year. All of those with over 90% attendance rate. Then there's a decent number of drivers in the 80s but then it drops. Ideally, we would see the top 20 or 22 with over 75% attendance rate, that's what I'll try to achieve in the next couple of years.

This year we gained a good amount of new drivers, some very fast, some not as fast but consistent, others that just need a little bit more practice and will be up there too. Others that vanished and never heard back a thing from them like Ben Bowcott and Keyter Bautista, others that died and came back alive like Ivan Georgiev...

Something I had to stop doing this year was the Livestreams, mainly due to the low views number, with the highest being 636 (Hungary), Bahrain had an unusual spike of 3795 views, way out there from the average and I can speculate and say it's because of search results from what happened this year in the real F1 race with Kimi's mechanic. The same happened last year with a spike in Singapore due to the crash between Kimi and Vettel too. The lowest view count was 83 (Spa). So for all the effort that was required to broadcast a race, do the commentating, etc. it wasn't worth it, not to mention, I wasn't racing mainly because of this too...
Next year I want to bring back the Race Highlights instead if Mat Harto shows some signs of life... We can try a different format, something that can bring more views to those too.

I also want to discuss the creation of a joint Classic F1 league with John Williamson from FiHS. I would like this to be a simple series with 10 races, ideally, with races in between the weeks we don't race SRHF1, especially during the summer break, with the hopes of attracting new drivers and to have more relaxed fun with both leagues racing together in one series. Again, I have yet to discuss this with John and hopefully, we can agree to a common solution that can benefit both leagues.

For next year, I hope to see a higher commitment from those drivers that earn an official seat either by qualifying in the top 14 of the ranking or by making it through the Winter Series. Our official grid changed way too much this season, that simply can't continue happening, so if you are going to commit for a permanent seat, just be 100% sure that you'll make at least 75% of the races. I put on the effort to customize your cars with personal numbers and helmets, so I hope to see something in return from you too which is simply to show up for the races you are supposed to. I know I sound mad but it's frustrating to see this, this is the fuel that drives my motivation to continue this project: the grid size and the quality of the races. When this is negatively affected, the entire league suffers.

2019 should be a better year, rFactor 2 will be more mature now with DX11, most of you already had to upgrade your computers to handle it, some of you still need to do this, ahem Mat Harto... I'm planning to start mod development before I go on vacation on December 21st, this year's mod turned out weird with the low-wing setup applicable to any track, I will personally make sure our next mod makes sense from a technical point of view to avoid these sorts of "setup tricks".

The entry list for 2019 will start shortly, I need to finalize some details with all of you first before going ahead and creating the topic. For now, enjoy the time off, we all need it!!! 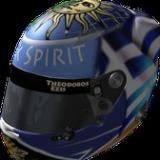 Theodoros Eziroglou
Accepted Answer Pending Moderation
0
Votes
Undo
Hello, the season was nice, and thx Adam Freitas for the invitation to join the server.
Id like to thx all the drivers that had patience on me, because race by race was improved and i was more faster and safer.
I hope next year will be better, and i hope to start earlier, even 2 hours earlier, cause here at Europe (Greece) is hard to join 04:30 on the morning for qual, and while im working at 09:00 on next day

"Life is measured in achievement, not in years alone” - Bruce McLaren
Comment
There are no comments made yet.

I think spring rates really need to be looked at in order to get the aero more realistic.

There are no replies made for this post yet.
Be one of the first to reply to this post!